MUTATIONAL LANDSCAPES OF MELANOCYTES IN SKIN 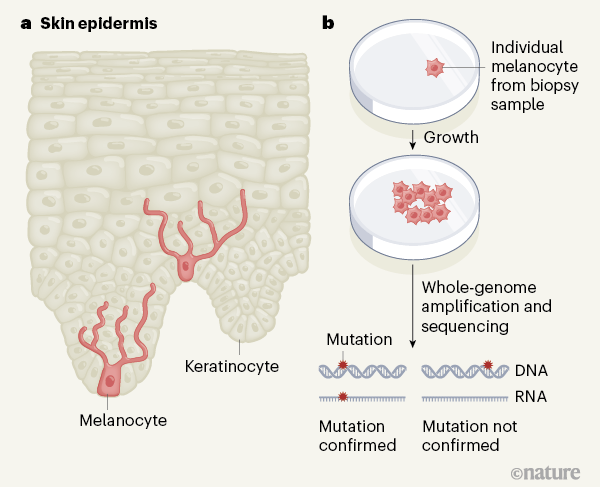 Skin cancer is the dysregulation of abnormal cells in the epidermis caused by UV-induced damage to the DNA. Despite the large mutational load that skin cells tend to accumulate as we aged, most mutations end up being harmless and do not develop into melanomas.

Thus, to understand the origins of melanoma and to elucidate the relevance of some of those initiating mutations, Tang et al. obtained small biopsies of normal epidermis and grew single cells into colonies in vitro. Surprisingly, DNA-sequencing analysis have showed that as we aged mutant colonies start expanding throughout our skin forming mutational clonal fields.

When comparing DNA- and RNA-sequencing analysis of individual melanocytes-derived colonies from normal or skin cancer biopsies, Tang et al. have found that the total number of mutations observed in sun-exposed melanocytes is similar to the number of mutations found in melanomas (around 20000 mutations per cell). However, the fact that melanocytes obtained from intermittent sun-exposed skin, such as the back or the thighs, presented more mutations than melanocytes from chronically-exposed areas, such as the face, was completely unexpected. These results correlate with the areas where melanomas are usually found.

Another interesting result was the big differences in the mutational load when comparing two melanocytes obtained from the same sun-exposed area in the same individual. These finding could imply either that some melanocytes are somehow protected from the accumulation of mutations or that some melanocytes are more prone to accumulate UV-induced DNA damage. In parallel, Tang et al, also found that at least 20% of scattered melanocytes had one melanoma-driving mutations leading in some cases to those “mutant clonal fields” in the skin that we mentioned earlier, which could explain de novo melanomas.

In conclusion, the molecular basis of cancer are still a long way to be completely understood.

This website uses cookies to improve your experience while you navigate through the website. Out of these cookies, the cookies that are categorized as necessary are stored on your browser as they are essential for the working of basic functionalities of the website. We also use third-party cookies that help us analyze and understand how you use this website. These cookies will be stored in your browser only with your consent. You also have the option to opt-out of these cookies. But opting out of some of these cookies may have an effect on your browsing experience.
Necessary Siempre activado
Necessary cookies are absolutely essential for the website to function properly. This category only includes cookies that ensures basic functionalities and security features of the website. These cookies do not store any personal information.
Non-necessary
Any cookies that may not be particularly necessary for the website to function and is used specifically to collect user personal data via analytics, ads, other embedded contents are termed as non-necessary cookies. It is mandatory to procure user consent prior to running these cookies on your website.
GUARDAR Y ACEPTAR