THE p300/NONO AXIS IS REPONSIBLE FOR BRAF INHIBITORS RESISTANCE 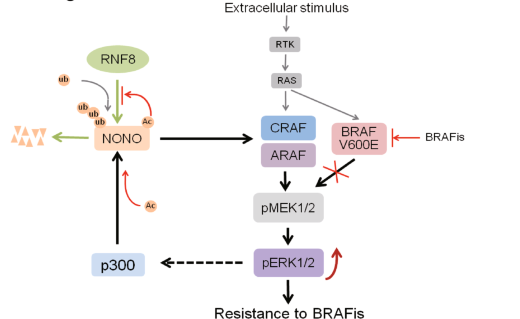 The KRAS/MAPK signaling pathway has been the headache of researchers for the last four decades because of all the feedback loops conferring resistance to different inhibitors. In fact, we are still mesmerized and excited when we find a novel resistance mechanism.

This is now the case for the p300/NONO axis, which has been recently identify as a novel mechanism of BRAF resistance in melanomas. BRAF V600E kinase is the main driver mutation responsible for about 50% of melanomas. These tumors initially present a pretty decent response rate to BRAF inhibitors but eventually end up developing an acquired resistance and, consequently in tumor relapse.

There is no doubt that this resistance is dependent on the aberrant expression of RAF1 and ARAF isoforms, which are able to sustain ERK activity upon BRAF inhibition, but the underlying molecular mechanisms regulating these two isoforms is still unknown. In a recent publication in Oncogene, the group of Xiao-Bin LV has been able to identify NONO (p54(nrb)), as a stabilizer of both RAF1 and ARAF upon its acetylation at 198k by the p300 acetyltransferase, which prevents its ubiquitination. A clinical correlation of the overexpression of the NONO/p300/RAF1/ARAF/pERK1/2 axis in resistant melanoma samples has been found and interestingly, this axis forms part of a positive feedback loop dependent on p-ERK1/2.  It is worth mentioning that these important results may open a novel therapeutic window because in a very elegant proof of concept study, this group has been able to overcome BRAF resistance both in vitro and in vivo, by treating tumor-resistant samples with a p300 inhibitor and consequently, blocking the positive feedback activating mechanism.

This website uses cookies to improve your experience while you navigate through the website. Out of these cookies, the cookies that are categorized as necessary are stored on your browser as they are essential for the working of basic functionalities of the website. We also use third-party cookies that help us analyze and understand how you use this website. These cookies will be stored in your browser only with your consent. You also have the option to opt-out of these cookies. But opting out of some of these cookies may have an effect on your browsing experience.
Necessary Siempre activado
Necessary cookies are absolutely essential for the website to function properly. This category only includes cookies that ensures basic functionalities and security features of the website. These cookies do not store any personal information.
Non-necessary
Any cookies that may not be particularly necessary for the website to function and is used specifically to collect user personal data via analytics, ads, other embedded contents are termed as non-necessary cookies. It is mandatory to procure user consent prior to running these cookies on your website.
GUARDAR Y ACEPTAR